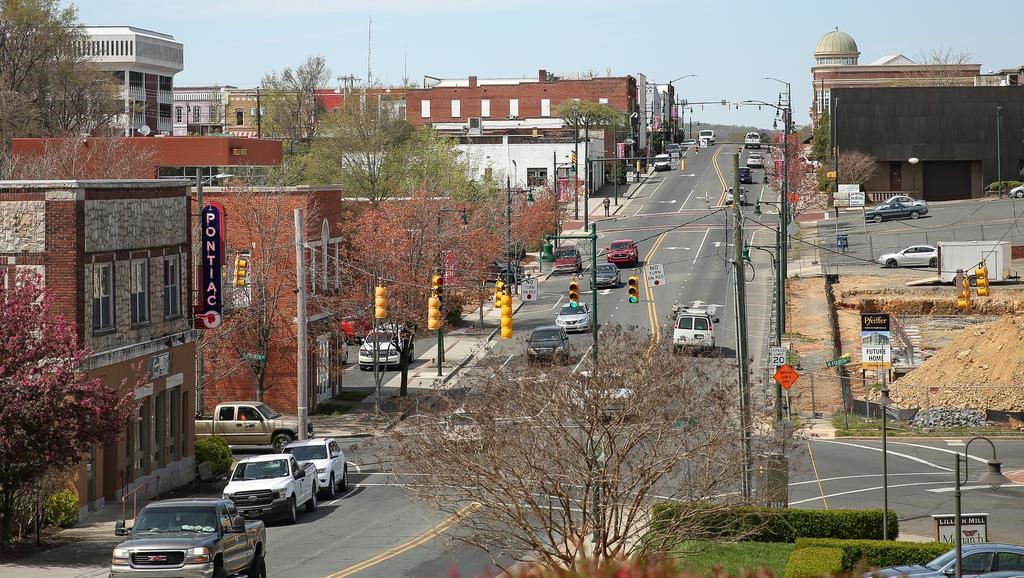 Albemarle leaders were determined to avoid the fate of other textile towns in the Carolinas. Following a roadmap set out in a 2013 study, the town has invested in recruiting, developed its own business park and launched a marketing campaign. Here’s how they did it.

Albemarle leaders saw the future in 2013. So, they decided to change it.

Determined to avoid the state of atrophy facing other rural textile communities dotting the Carolinas, the Stanly County town 40 miles east of Charlotte first sought to identify its major issues.

Stanly County’s jobless rate had spiked back up to 9.9% after falling from a high during the Great Recession of 14.8%. Its population had stagnated at slightly less than 16,000. There was little sign of growth opportunities to keep young people from moving away.

A report by Albemarle’s Citizens Economic Development Task Force, completed six years ago, was a wake-up call for the city. Mayor Ronnie Michael says the report — funded in part by a grant from electric co-operative ElectriCities of North Carolina Inc. — provided a roadmap for a way forward.

“Our future is going to depend on us,” Ronnie Michael says, describing the suggestions included in the report. “We can’t wait on someone else.”

Among the top recommendations in the report prepared by Elkin-based Creative Economic Development Consulting:

• Hire an economic development director for the town rather than rely on recruiting by Stanly County.

• Bring on a staff person to support existing businesses in Albemarle.

• Expand the city’s Planning and Community Development Department to include tasks directly related to economic development. 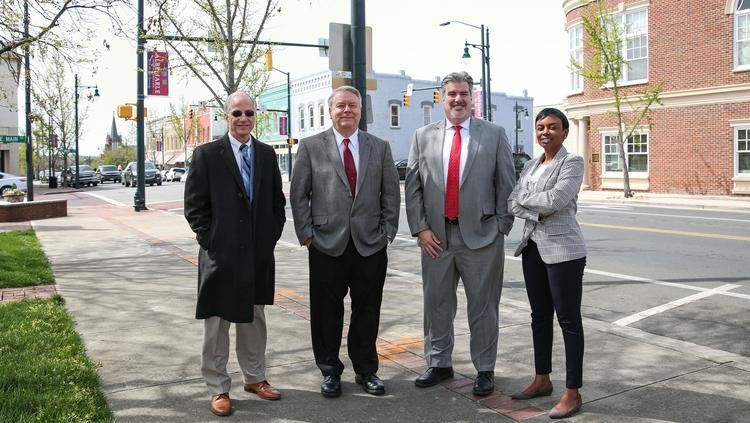 Albemarle has taken action on virtually all of those recommendations, starting with the hiring in 2014 of Mark Donham as director of economic development. Donham had served as economic development director for the city of Monroe in the late 1990s and in city government in Monroe and Oxford, North Carolina.

“It just felt like we needed to take more control of our economic destiny versus the antiquated model that a lot of cities our size use,” says Albemarle City Manager Michael Ferris.

Donham arrived to find a City Council, city staff and others ready to bring Albemarle into its own as an employment and residential center. Donham focused on a jobs base that would keep graduates from nearby Pfeiffer University in the area.

“Most of our success has been working with existing industry,” Donham says.

In 2018, Enforge considered moving away from Albemarle with its jobs and its new hot-forging process for steel auto parts. Albemarle, the state and Stanly County responded with the offer of incentives to keep the company, which had opened in the city in 2009. Enforge remained and the city saved 100 jobs.

“This is a good example of why we are structured for economic development as we are now,” Ferris says. “So we can react and move more quickly to serve everyone’s needs.”

Then Donham and others realized the town would have to find a solution to the limited commercial real estate options — either prepared land or available buildings — that would attract new industries. “We have very little product left,” Ronnie Michael says.

In June, construction starts on Albemarle Business Center, a 282-acre business park at the crossroads of U.S. Highway 52 and N.C. Highway 24/27 that can hold up to 2.5 million square feet of industrial and warehouse space. The first lots should be available in mid- to late 2020, and there’s room for up to 12 manufacturers and up to 4,000 new jobs for the city.

The city bought the land two years ago for $1.8 million. 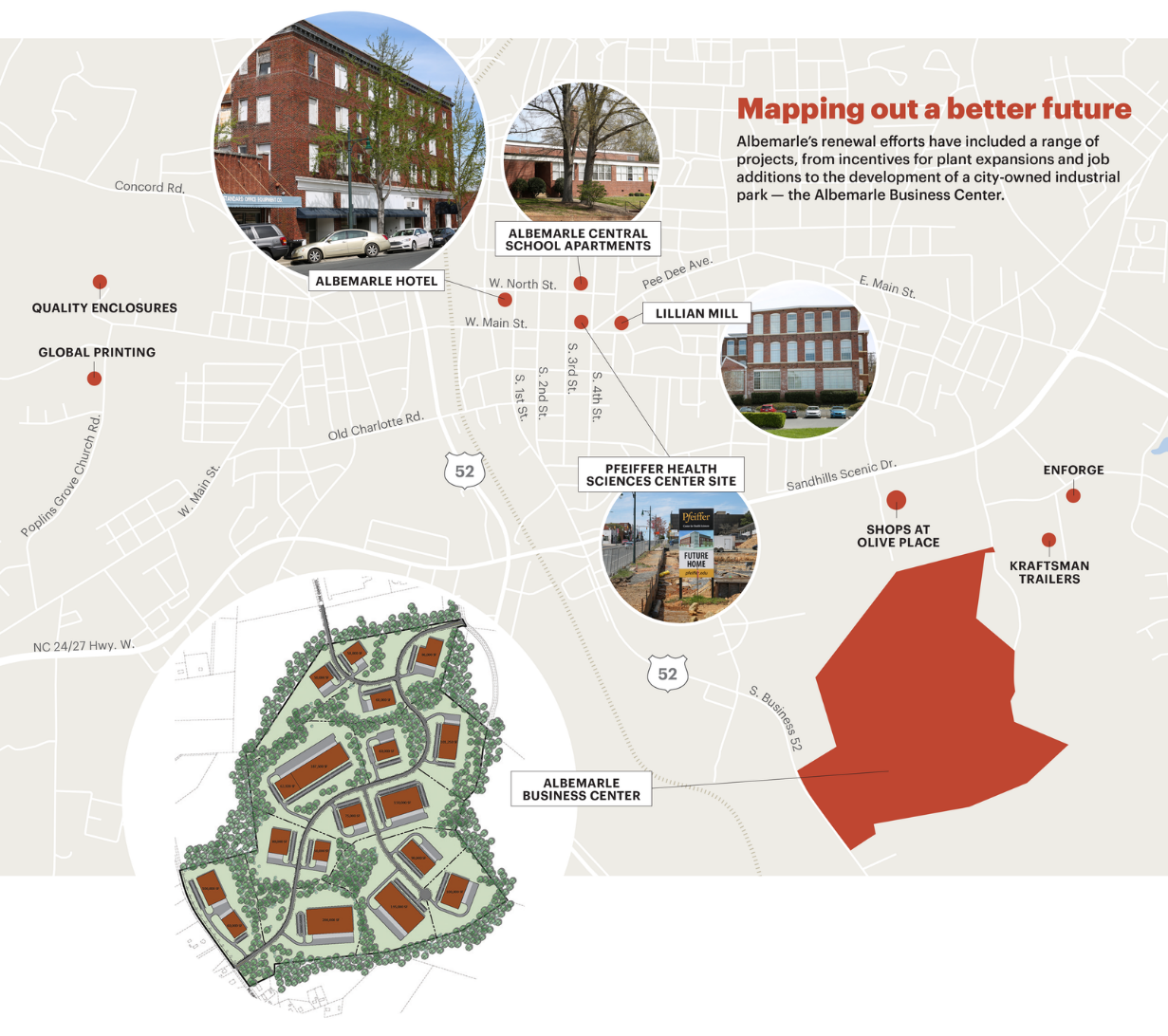 Ronnie Michael says he expects Albemarle City Council will approve a shell building for the business park but it’s too early to discuss details.

The Urban Institute’s Jeff Michael, who is the mayor’s first cousin, says available industrial space is a must for rural communities.

“If you don’t have that space, either flex space or land, it’s a nonstarter,” he says. “You won’t be in the game.”

Author and Stanly County resident Ken Russell, who recently retired from nearby Pfeiffer University, says consulting the community was the perfect answer for Albemarle when it formed the Citizens Economic Development Task Force. In his next book, which has a working title of “Social Ideation,” Russell will talk about how connections in a community can flower into collaboration to solve problems in a city or in a corporation.

“All those things come together to create that community that will succeed,” he says. “You put the right things together and amazing things can happen.” He says Albemarle is a perfect “role model” for the ideas in his upcoming book.

Albemarle also gave Donham another mission beyond the standard jobs-recruitment role — retail development. Working with Alabama-based retail consulting firm Retail Strategies, the town attracted the interest of a developer that opened the 150,000-square-foot Shops at Olive Place on N.C. Highway 52. The center’s tenants include: Hobby Lobby, Ross, Petsmart, East Coast Wings and others.

Adding to the town’s economic diversification, Pfeiffer University is building a $15 million, 42,000-square-foot Health Sciences Center in downtown Albemarle instead of on its Misenheimer campus 16 miles away. Hundreds of students in two graduate health-science programs — physician assistants and occupational therapy — will attend classes there beginning in 2020.

Of course, remaking the city’s future also involves remaking its image. A new marketing campaign emphasizes the water, air, land and opportunity that’s available in Albemarle and in the Uwharrie National Forest, Morrow Mountain and Yadkin River area. That process has been carried out in conjunction with Stanly County and included naming a public information staffer.

It’s almost like some of the high times of Albemarle of the textile era is returning, Ronnie Michael says. “Now, it’s coming back.”

Link to the original article in the Charlotte Business Journal in the May 2nd Edition: